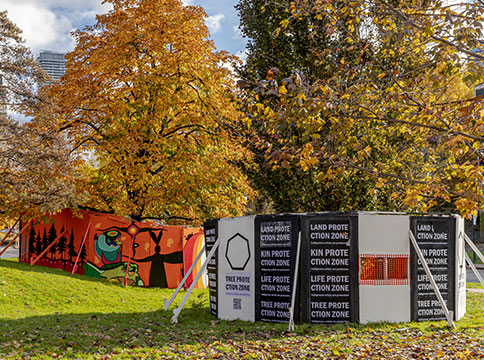 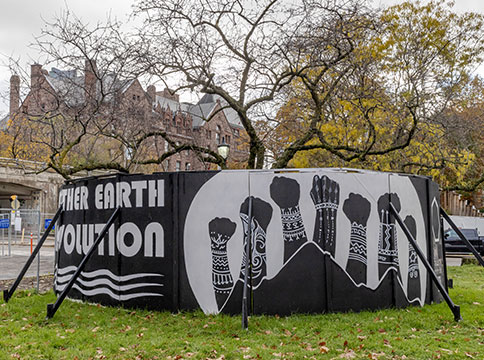 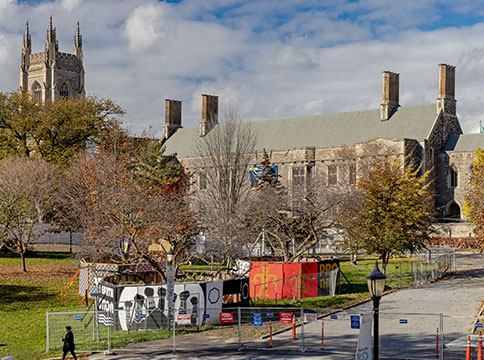 As large-scale construction on the University of Toronto’s Landmark Initiative continues around the Hart House Commons, a number of large tree-protection hoardings have inspired a public art project entitled the Tree Protection Zone (TPZ).

TPZ involves artists who transformed the hoardings into a celebration of the garden and trees, the buried waterway (Taddle Creek) that remains under the soil, and the community that is centred here. The aptly named project features specially commissioned, mural-sized works by eight Indigenous artists and their collaborators considering the preservation of life, water, and kin; and how each is inextricably linked to the protection of trees.

This temporary public art project provides an opportunity to engage students and the wider public in essential conversations about the land and its people and helps to set the stage for the permanent Indigenous Landscape Project—an offshoot of the Landmark Initiative—that will be constructed on the Commons in Spring/Summer 2022.

The artists participating in the TPZ were supported by student assistants and emerging artists who benefited from the unique opportunity to closely engage with the artists’ processes, vision, and knowledge.

The TPZ was completed and open for public viewing on September 7, 2021.

We gratefully acknowledge operating support from the Canada Council for the Arts, the Ontario Arts Council, and the Toronto Arts Council. Additional project support is provided by the City of Toronto’s Arts and Culture Grant, and the Ministry of Colleges and Universities (MCU) and U of T’s Postsecondary Education Fund for Aboriginal Learners (PEFAL).