Do not invent a tablecloth

A program of Rehearsal for Objects Lie on a Table

Creating a new composition using the sounds of a Steinway piano and other objects, Toronto musician Ryan Driver rehearses Gertrude Stein’s Objects Lie on a Table in the company of a new performable arrangement of funny things by Terrarea. Join us in Hart House for object ogling at Justina M. Barnicke Gallery, followed by a procession to the Steinway in the East Common Room at 8pm to hear some things together.

It’s Steinway or the highway.

Terrarea is a Toronto-based collective comprised of Janis Demkiw (BFA 1999, York University), Emily Hogg (BSc 2000, University of Alberta; MLA 2003, University of Toronto) and Olia Mishchenko. Terrarea engage a shared collection of objects that act as dynamic agents on a playing field. Their approach is variable and evolving — a responsive means of making arrangements, handling matter, and coping with impulses. Flexibility is key. By invitation and initiative, Terrarea has been staged in various forms and configurations including: installation and intervention, buffet dinners, residencies, light shows & atmosphere at Don Blanche, DoubleDouble Land, VSVSVS, Trinity Square Video, Art Metropole, and the Art Gallery of York University (AGYU), among others. Most recently, they have projected things at the University of Toronto Planetarium in cooperation with Present Junction, and as part of the 2015 Toronto International Film Festival (TIFF) Wavelengths program. 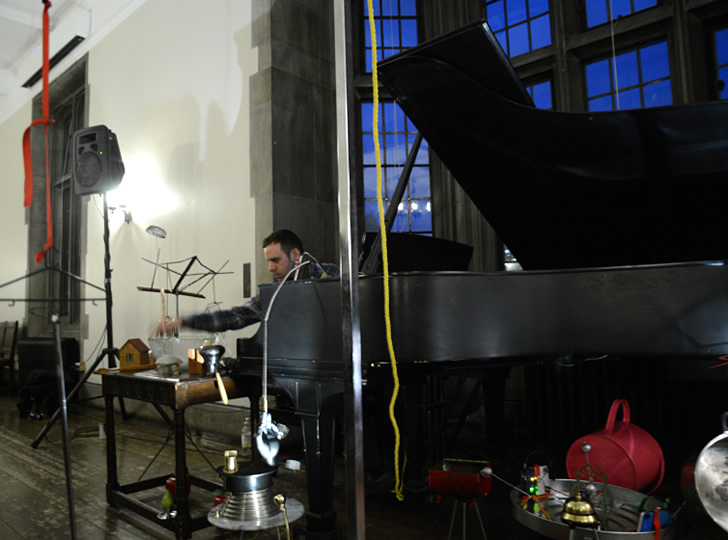