A program of “We Are Continually Exposed to the Flashbulb of Death”: The Photographs of Allen Ginsberg (1953-1996), Robert Giard: Towards the Particular and AA Bronson: Life and Work

Join writer, performer and theatre creator Evalyn Parry (Director of Buddies in Bad Times Young Creators Unit), in a creative writing workshop at UTAC. With a focus on writing for performance, Parry and Queer Writes will lead a series of writing exercises inspired by the Ginsberg, Giard and Bronson exhibitions on display.

PLEASE BRING: a notebook, a writing implement, an image of your choosing that relates to the idea of queer visibility, and some thoughts what that means to you.

Evalyn Parry is an award-winning queer theatre-maker, songwriter, poet and performer whose innovative, interdisciplinary practice is inspired by intersections of history, autobiography and social activism. Over the last decade she has released five CD’s; written, performed and directed numerous theatre productions, and performed at festivals, theatres & campuses internationally. She is a recipient of 2013 The KM Hunter Award for Theatre, The Ken McDougall Award for Upcoming Director, The Colleen Peterson Songwriting Award, and directed Obaaberima, by Tawiah M’Carthy, winner of 2013 Dora Mavor Moore Award for Best Production. Her show SPIN (featuring a bicycle as musical instrument) has toured the continent for the last three years, and returns to Buddies in Bad Times Theatre this November. Arts education is also a vital part of Evalyn’s practice, and she has been the Director of the Young Creator’s Unit at Buddies in Bad Times Theatre for the last 8 years.

Formed in 2011 and supported by the SGDO along with The Mark S. Bonham Centre for Sexual Diversity Studies, Queer Writes is an academic and creative writing group for the LGBTQ community and their allies on U of T campus. The group focuses on combating writing blocks, quieting the inner critic, and creating opportunities for LGBTQ students to share ideas in a non-judgmental space. Guest facilitators have included such Toronto-based LGBTQ writers as Mary Rogan, Nina Arsenault, Dana Seitler, and Debra Anderson. Be on the look out for their bi-yearly salon ”Pussy Basket” at Videofag in Kensington Market.

—
Title and Page Image: AA Bronson in collaboration with Travis Meinolf, Tent for Healing, 2013 (detail), installed at the Stedelijk Museum, Amsterdam. Courtesy of the artist and Esther Schipper, Berlin. 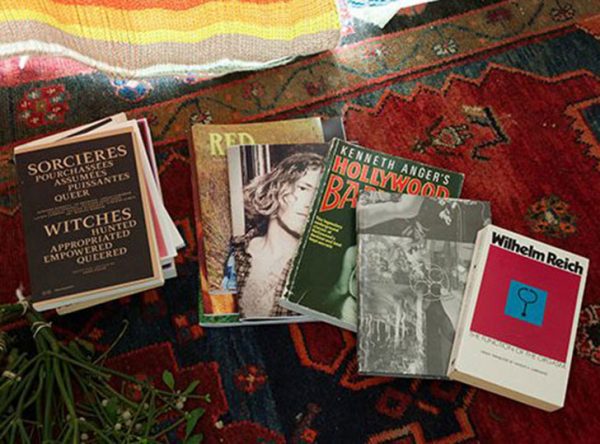