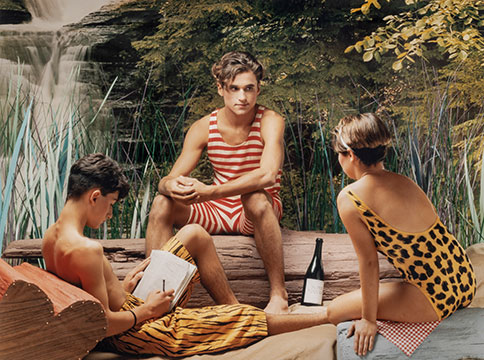 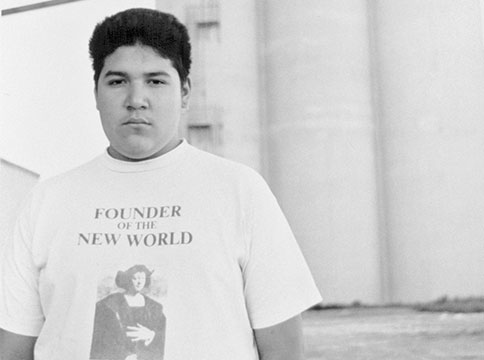 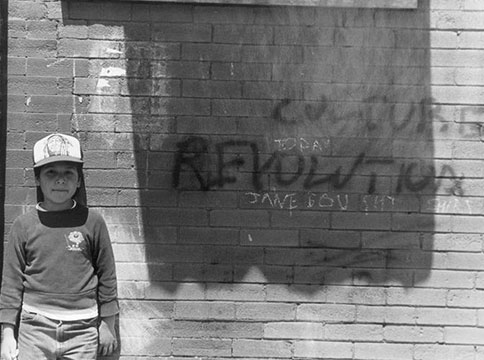 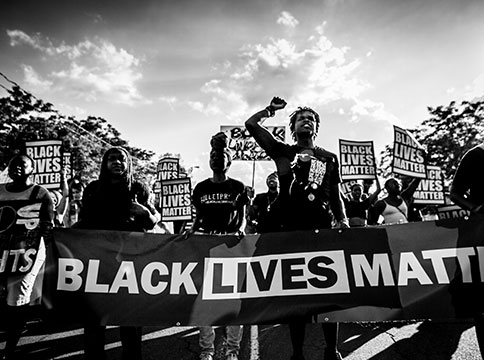 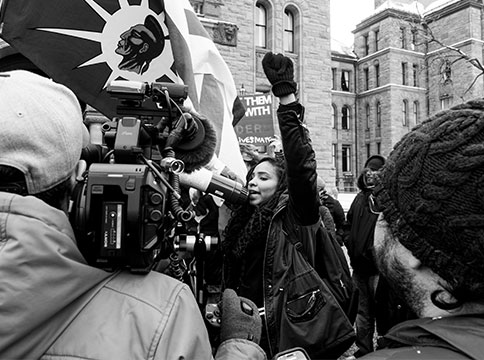 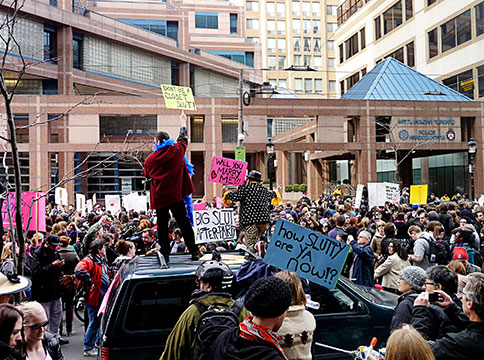 This is part of Art Museum’s Virtual Spotlights, a deep dive into stories from our collections, exhibitions, and projects while our physical gallery spaces are temporarily inaccessible to the public.
—

Click on the images on the slide carousel to read more.

David Buchan’s Canadian Youth (1989) is a photograph based on a 1937 painting of the same name by Charles H. Scott. In the early days of the pandemic, I offered this self-consciously idyllic scene in response to the #MuseumBouquet instead of the requested flowers from our collections. It was a way to express the wish to be able to assemble again.

In the weeks of isolation, any images of bodies assembled together gained political potency. As governments scrambled to define the new rules of engagement, they centred the nuclear family as the gold standard in directives to stay home, tossing the social body back to the mores of 1950s America. Indeed, the coronavirus is proving to be a true disaster for Feminism, with the sudden revocation of public school and childcare foisting the burden of care right back into the private sphere as unpaid or precarious labour.

Buchan was an artist who created his own queer genealogy. For the 1981 YYZ exhibition “Roots, Lamonte Del Monte’s Family Tree,” he created a series of photographic portraits that cast his own social circle as a rambling set of eccentric relatives. The poster for the show is a raucous group portrait, a memento mori of a bygone scene. Some of these figures, including Buchan, died prematurely during the AIDS epidemic. In this present moment’s recasting of the public sphere as a space of potentially lethal infection, I am reminded of the fear of contact looming over all those who came of age in the shadow of AIDS.

What is naturalized and denaturalized are key themes in Buchan’s work and his free play with the codes of advertising and popular culture is evident in the unapologetic artifice he incorporates into Canadian Youth, including an outlandish photomural of a waterfall, logs patched with faux-wood vinyl, a drop sheet doubling as a sandy beach, and a wine bottle with a label that boasts “Super, Natural.” The threesome of bathers is centred on the man in the red-striped one-piece who steals a sideways glance towards the woman in the leopard print swimsuit, seen only from the back, while another man is consumed in writing. This last detail confirms the status of the image as a bohemian scene, one not so distinct from the images of Trinity Bellwoods Park on the first warm summer weekend, when a flock of Torontonians emerged from hibernation in a surge of unsanctioned gathering. Their action was immediately subject to public shaming. While some of the anger arose from non-urban news consumers who already regard city living as unhygienic, the rest of the disapproval was directed at the recklessness of these youthful bodies flaunting their leisure in the face of a health crisis.

But for the insertion a few flourishes, the composition of Buchan’s image remains true to the original painting by Scott, though the positioning of nature in the scene is radically different. In Scott’s painting the figures are enmeshed with the greenery. The statement of national identity in the historical work’s title emphasizes a sense of belonging to this landscape. Today this carefree bucolic scene is haunted by questions. Whose land is this? How has the image of a modern Canada been fabricated at the expense of suppressing Indigenous cultures, identities, languages, public spheres, and social orders?

Jeff Thomas’s “Bear Portraits” come to mind as counterpoint. Photographing his son Ehren “Bear Witness” Thomas (now famous as a member of “A Tribe Called Red”) from childhood into adulthood, across various locations, Thomas captures the complexity of Indigenous identity against the power of colonial erasure. In one diptych, a teenaged Bear reveals the two sides of his T-shirt: on the front a portrait of Christopher Columbus with the caption “Founder of the New World,” and on the flip side, the retort “Little White Lies.” The photograph is taken in Winnipeg against an industrial backdrop. Such urban spaces are important sites of inquiry for Thomas, who grappled with what it might mean to be both urban and Iroquois while growing up in Buffalo. Commenting on one of his early directions, he states “I moved forward in my work aware of the fact that my camera was helping to make this ‘city Indian’ visible.”

The origin point of the series shows a seven-year-old Bear leaning against a brick wall on Toronto’s Queen Street featuring the words “culture revolution,” a call to imagine a possible future for his son. Thomas states: “The camera and the photograph are points of resistance to becoming completely absorbed into white society. They became my, and by extension my son’s, ‘culture revolution’ against the invisible urban Iroquois presence.”

In recent weeks, there has a been a peak in public recognition of the ongoing structural violence and effects of anti-Black and anti-Indigenous racism in Canada. The outpouring of public and institutional support for efforts to end this violence marks no less than a cultural revolution. Whether guilty of performative allyship or not, the fact is that when nail salons, big museums, and high-ranking political officials all utter the words “Black Lives Matter,” this represents a dramatic shift in the public conversation. Hearts and minds are being changed, and a movement once deemed radical is becoming mainstream.

The Art Museum acquired Jalani Morgan’s photographs documenting Black Lives Matter activism two years ago. In the process of the acquisition, we discussed how important these images would be as a moving cipher for social change. The images exemplify how documentary photography is altered by the proximity of the artist to his subjects, allowing an agency in these images that comes from a place of embodied knowledge. Similar to Jeff Thomas, Morgan’s commitment as an artist is to inscribing a community within the field of representation, countering stereotypes as they are produced in commercial media and perpetuated by white supremacy. In particular he honours the many sites of Black knowledge through his work as a photo-editor for a local newspaper, in gallery exhibitions that fill out missing archives, and through tender portraits of people he encounters in his day-to-day. Morgan’s documentation of BLMTO is an extension of a larger practice; he is a participant observer. Scholar Idil Abdillahi reflects on this position: “While we live, he lives, we resist, he resists, we struggle, he struggles.”

As our city lives through emergency measures, the public realm is being patrolled more visibly across more sites and with a wider effect on the whole population. In the process, a larger public has had a light taste of the routine intimidation and harassment that frames up the everyday of racialized and marginalized communities. Out of the context of this radical curtailment of civil liberties, we nevertheless see the courage of people willing to rise up and gather together in the streets. BLMTO’s strength is rooted in an intersectional politics that emerges intrinsically out of having women, queer, and trans leadership. As Desmond Cole has observed on the depth of their advocacy: “BLMTO advocated for Black sex workers, for Black people who didn’t speak English, for Black Muslim people.” Likewise, they identify commonalities of experience between anti-Black racism and anti-Indigenous racism. BLMTO emerges out of our city’s histories, notably the standing influence of Black Feminism.

The theme of social uprising is also taken up in Wendy Coburn’s series Anatomy of a Protest. Coburn’s last major work, it offered a study of infiltration tactics used to divide and sensationalize the Slutwalk, a grassroots protest against rape culture that coalesced around a victim-blaming comment made by a Toronto police officer and subsequently emerged as a global movement. Coburn’s complex visual investigation brought together footage and photographs taken by citizen journalists, the media, and the artist’s friends to reveal the sinister collusion of the police and the press in altering the stories and voices of protesters.

In the hands of artists like Coburn and Morgan, the visual record of protest actions becomes a studied witnessing of the events of our time that counters the stifling unilateralism of history as it is told by the victors. This pandemic has exposed our differential experiences of moving through the world as they are defined by race, class, gender, sexuality, ableism, citizenship-status. The systemic factors that engender inequality have been laid bare. In this momentous time of political unrest, there is opportunity to cast another, more just future.