Plastic Heart: Surface All the Way Through

Plastic Pollution, Toxicity, and Policy Change is a public dialogue between activists, scholars, scientists, and policy experts tackling the issues at the forefront of plastics pollution policy. The panel will focus on activating resistance to mechanisms of petrochemical pollution affecting human health and ecosystems. The known and unknown effects of plastic as a matrix for chemical accumulation, the dangers of its circulation in waterways, and the uneven distribution of its impact on communities is driving a movement that calls for “turning off the tap” and regulating the plastics industry and future development.

Mark Fisher became the President and CEO of the Council of the Great Lakes Region (CGLR) in 2014, which is comprise of CGLR Canada, CGLR USA and the CGLR Foundation. Prior to joining CGLR, he served as a foreign policy advisor in the Privy Council Office, which supports the Prime Minister of Canada and the federal Cabinet, where he focused on advancing Canada’s interests in North America and the Asia-Pacific region. Mark has extensive experience advising senior decision-makers on a range of socioeconomic and environmental issues facing government, business, and the non-profit sector. In addition to CGLR, he is an elected school board trustee with the Ottawa-Carleton District School Board, is a member of the International Joint Commission’s Great Lakes Water Quality Board, and is a director on the board of Easter Seals Ontario. Mark is also a recipient of the Royal Canadian Legion Cadel Medal of Excellence.

Vanessa Gray (she/her) is a 28-year-old queer Anishinaabe kwe from the Aamjiwnaang First Nation, located in Canada’s Chemical Valley. As a grassroots organizer, land defender, and educator, Vanessa works to decolonize environmental justice research by linking scholarly findings to traditional teachings. Vanessa is a co-founder of Aamjiwnaang & Sarnia Against Pipelines (ASAP), host of the annual Toxic Tour of Canada’s Chemical Valley. She continues to take part in a diversity of tactics such as direct action, classroom lectures, co-hosting Toxic Tours and Water Gatherings.

“Growing up in Aamjiwnaang surrounded by petrochemical refineries has always made me question my relationship to the environment. Being Indigenous in Canada continues to be the struggle to uphold my responsibility to the Anishinaabek Territory. Education and understanding our interconnected struggles is essential to our ever-growing movement, but we can’t afford not to take risks for a sustainable and just future.”

Michelle Murphy is a technoscience studies scholar and historian of the recent past whose research concerns decolonial approaches to environmental justice, reproductive justice, Indigenous science and technology studies, infrastructures and data studies, race and science, and finance and economic practices. Murphy’s current research focuses on the relationships between pollution, colonialism, and technoscience on the lower Great Lakes. Murphy is a tier 1 Canada Research Chair in Science & Technology Studies and Environmental Data Justice, as well as co-director of the Technoscience Research Unit, which hosts a lab and is home for social justice and decolonial approaches to Science and Technology Studies. She is Métis from Winnipeg, from a mixed Métis and French Canadian family.

Chelsea Rochman is an Assistant Professor in Ecology at the University of Toronto and a co-founder of the U of T Trash Team. Chelsea has been researching the sources, sinks, and ecological implications of plastic debris in marine and freshwater habitats for more than a decade. She has published dozens of scientific papers in respected journals and has led international working groups about plastic pollution. In addition to her research, Chelsea works to translate her science beyond academia. For example, Chelsea presented her work to the United Nations General Assembly and is called upon to advise the provincial and federal governments on policies related to plastic pollution. Through the U of T Trash Team, she leads local science efforts that can directly inform local and global mitigations efforts.

Heather Davis (moderator) is a writer, researcher and teacher whose work draws on feminist and queer theory to examine ecology, materiality, and contemporary art in the context of settler colonialism. She is an assistant professor of Culture and Media at the New School. Her current book project, Plastic Matter, re-examines materiality in light of plastic’s saturation.

—
Page Image: Postcard from Christina Battle, THE COMMUNITY IS NOT A HAPHAZARD COLLECTION OF INDIVIDUALS, 2021. 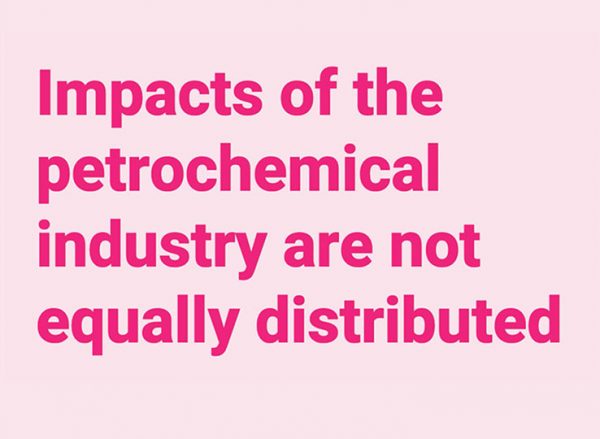